This is a rare example of its kind − a series of journals begun by a teenage girl and continued into her twenties. Annabella Alexandra Campbell Innes was born in Australia in 1826 and married Patrick Boswell in 1856. Her journals and letters, most dating from 1843 (begun when she was 16 years old) to after her marriage are a rare example of a young woman’s personal writings from nineteenth-century regional Australia. Annabella Boswell’s journals conjure vividly the life of landed gentry in a newly colonised country with the honest eyes of a teenager/young woman who had highly developed writing skills.

Annabella was an accomplished artist. Most of her sketches were botanical in nature, probably reflecting her education which would have been influenced by her aunt Margaret Innes, daughter of Alexander Macleay (Colonial Secretary, former secretary of the Linnean Society in London, and a Fellow of the Royal Society). Her drawings of plants and flowers mirror the plants and flowers (native and introduced) at various places she stayed, but especially at Lake Innes, where she lived with her widowed mother and her family at the home of her uncle Archibald Innes, Lake Innes House.

The collection includes journal entries, letters, sketches, and photographs dating from the mid-nineteenth century. Later in life (after she and her husband had relocated to Scotland), keen to preserve a record of her life in New South Wales, Annabella re-wrote many of her journals, collected and copied letters that had been written between herself, her mother and sister and her cousins, and published parts of her journals. She also kept journals of her travels to the continent, and made copies of the letters written by her son during the Boer War.

Annabella Boswell’s papers offer a unique insight into colonial life (especially in regional areas) in New South Wales in the mid-nineteenth century. As an archive, the journals provide valuable material for research and interpretation of Port Macquarie’s convict and free settlement period, and life of the landed gentry in New South Wales. 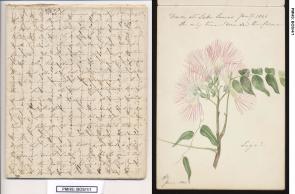 More information about this listing is available here; eHive