The collection, held in the University of Sydney’s Archives and Macleay Museum, documents the activities and careers of eminent academics associated with the oldest department of Anthropology at an Australian university. It puts on record a time of dominance of the pioneers of Australian and Pacific social anthropology which included AR Radcliffe-Brown, AP Elkin, Camilla Wedgwood, and HIP Hogbin as well as researchers funded by the Australian National Research Council such as WEH Stanner, Olive Pink, Ursula McConnell and WL Warner, all of whom carved out significant anthropological careers outside Sydney University.

The holdings include fieldwork notes, genealogies, correspondence, photographs, audio-visual material, reports as well as artefacts documenting the life and culture of Indigenous communities in Australia and the South Pacific. For Australia the records relate to Aboriginal communities in Western Australia, South & Central Australia, Arnhem Land, Tiwi Islands, Daly River and Wadeye (Port Keats) in the Northern Territory, Cape York, Queensland and New South Wales, while the South Pacific records mainly relate to Papua New Guinea and the Solomon Islands. The records are in high demand especially for Land Title claims, Indigenous family research and cultural and language renewal activities, and for national and international research projects.

The influence of the Sydney academics on Indigenous and South Pacific anthropology, within Australia and internationally, was profound as was their influence on government administration in the South Pacific both before and after the Second World War.  They, and the Department's graduates, were involved in the Australian School of Pacific Administration and in Colonel Alf Conlon's Directorate of Research and Civil Affairs during World War II (Conlon was a University of Sydney graduate and both Hogbin and Wedgwood were commissioned as Lieutenant-Colonels in the Directorate). 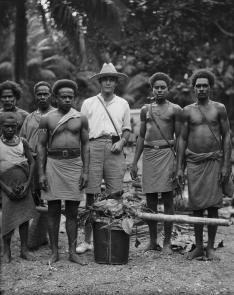