HomeConvict Records: Archives of Transportation and the Convict System, 1788-1842

Convict Records: Archives of Transportation and the Convict System, 1788-1842

The convict records of Australia are of outstanding national significance for their comprehensive documentation of the system of mass transportation of male and female felons whose arrival and continued existence on the continent laid the foundations of European Australia. The records contain details of the administration and management of the system, and the officials and individual convicts involved. They also document the human stories of the transportation system, recording the experiences of these transported men and women. The convict records have provided a rich resource for successive generations of historians and writers, whose works have often generated debate about the origin of European Australia and its effect on our national identity. Wider aspects of colonial and British history are also illuminated by the convict records. The operation of the convict system in New South Wales necessitated the creation of the colony's physical and social infrastructure, and this process is amply demonstrated in the records. A study of the convict records of New South Wales also sheds light on the operation of the late 18th and early to mid 19th century British penal system, and the ways in which contemporary ideas about crime and punishment led to what Professor Brian Fletcher has called 'an interesting and quite unique experiment in the treatment by Britain of its convict population'. 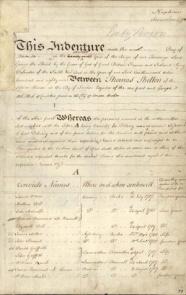