The penal settlement at Moreton Bay was established in 1824 in response to a recommendation of the Bigge Reports that another place of secondary punishment be provided to deal with a crime wave in Sydney and the sentences imposed on repeat offenders. The first settlement at Redcliffe proved unsuitable, and in 1825 a principal settlement was established on the Brisbane River. The Moreton Bay penal settlement became self-sufficient in 1826 after the arrival of Captain Patrick Logan, a harsh disciplinarian, and became a byword for severity, described in the old song, ‘Moreton Bay’, as a place where ‘excessive tyranny each day prevails’. Between 1826 and 1829 the number of prisoners at Moreton Bay rose from 200 to nearly 1000, but throughout the 1830s increasing agitation to bring about the end of the system of convict transportation led to a decline in prisoners coming to Moreton Bay, and by 1839 only 107 prisoners remained in the settlement. It was closed in 1842, when the Moreton Bay area was opened to free settlement, with Brisbane Town as its centre. The colony of Queensland was separated from New South Wales in 1859.

Records held in Queensland State Archives and the State Library of Queensland document the relatively short period of Moreton Bay’s life as a penal settlement before the modern city of Brisbane grew and all but obliterated the physical traces of its existence, with the exception of two buildings which have survived into the 21st century, the Commissariat Store and the Windmill. Prominent in this documentation are the architectural plans of buildings in the penal settlement that accompanied the report compiled by Andrew Petrie, Clerk of Government Works, in 1837 to investigate Brisbane’s potential as a future port. These plans are held by the Queensland State Archives, as are records of trials conducted at the penal settlement, and of public labour performed by Crown prisoners, as well as other records relating to the penal settlement period, including a chronological register of convicts at Moreton Bay. The State Library of Queensland also holds records relating to the Moreton Bay penal settlement, including artworks depicting the settlement during the convict period.

The records of the convict period in Queensland complement those already inscribed on the UNESCO Australian Memory of the World Register from New South Wales, Tasmania and Western Australia, and are significant as documentation of this key period in the history of Australia. They are also significant as the earliest documents to describe the settlement of Brisbane, and the foundation of what became the colony then state of Queensland. The architectural plans in the Petrie report also have aesthetic significance, and are significant for their capacity to illustrate the broad reach of military architecture across the British Empire. 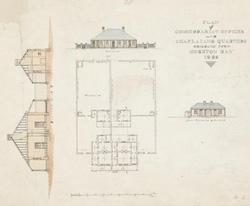