The Endeavour Journal of James Cook

The Endeavour Journal is significant as the key document foreshadowing British colonisation of Australia. It has been cited in countless works on Pacific exploration and on first contacts between Europeans and the indigenous peoples of Australia, New Zealand and the Pacific. The journal, written between 1768 and 1771, records one of the first English voyages to the Pacific and one of the first in which exploration and scientific discovery, rather than military conquest and plunder, was the expedition's primary purpose. It is significant for its recording of the exploration of Tahiti and the Society Islands, the first circumnavigation and detailed charting of New Zealand, and the first charting of the eastern coast of Australia. The Journal is also significant as one of the few substantial manuscripts in the hand of one of the world's greatest navigators and maritime explorers, James Cook. It is of high significance in the history of British colonisation of Australia and as one of the earliest written records of the indigenous peoples of Polynesia, New Zealand and eastern Australia. It is unique and irreplaceable, as no other journal of this voyage is in Cook's handwriting. Inscribed on the International Memory of the World Register in 2001. The Memory of the World International Register lists documentary heritage which has been identified by the International Advisory Committee in its meetings in Tashkent (September 1997), in Vienna (June 1999), in Cheongju City (June 2001), in Gdansk (August 2003), in Lijiang (June 2005), and in Pretoria (June 2007) and endorsed by the Director-General of UNESCO as corresponding to the selection criteria for world significance. 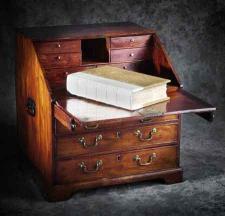 Mahogany fall-front bureau believed to have been used by Captain Cook on his Pacific voyages
More information about this listing is available here; A full digitised version of the Endeavour Journal is available online, More information about the Endeavour Journal, NLA Ref: MS 1
This collection is also inscribed on the International Register of the UNESCO Memory of the World