This twenty-five page letter, written by journalist Keith Murdoch to his friend, Prime Minister Andrew Fisher, helped establish the notion of Gallipoli as both a disaster and a place of national sacrifice. Murdoch's conversational yet brutally honest letter played a key role in ending the Gallipoli campaign and in the evacuation of British and Anzac troops from the peninsula. In its opening pages, Murdoch describes the Gallipoli campaign as 'undoubtedly one of the most terrible chapters in our history'.

The letter was written and cabled to Fisher in September 1915 after Murdoch had returned to London from his four-day visit to Gallipoli. In London, Murdoch met with senior members of the British government who then persuaded the British Prime Minister, Henry Herbert Asquith, to read the letter. Asquith had it printed as a state paper and circulated to the committee in charge of the campaign. By January 1916, all Allied troops had been successfully withdrawn from Gallipoli without loss of life. 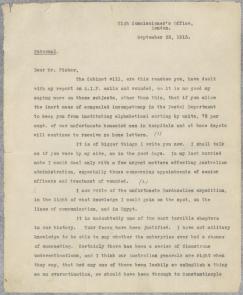