HomeThe Story of the Kelly Gang 1906

The nine minute fragments that remain of The Story of the Kelly Gang, with its promotional booklet to contextualise the tale, have historical significance as the first Australian narrative film, and thus the foundation of a vigorous Australian film-making industry. The film has creative significance as the germinal filmic representation of the Kelly bushranger legend, a central element in Australian culture, which has since been made at least 22 times. 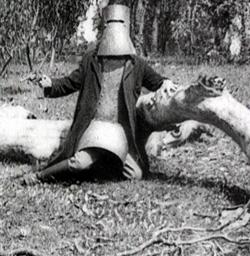 Ned Kelly's last stand, from 'The Story of the Kelly Gang' (1906)
More information about this listing is available here; National Film and Sound Archive
This collection is also inscribed on the International Register of the UNESCO Memory of the World