The records are those of the first bank and the oldest surviving, continuously operating company in Australia.  There is only one Minute Book which captures the process of establishing an officially-sanctioned monetary system for a colony. There is only one Charter of Incorporation which survives for a Bank bearing the signature of Governor Lachlan Macquarie.

Opening for business in Sydney on 8 April 1817 after a series of public meetings the previous year, the Bank, endorsed by Governor Lachlan Macquarie, offered the people of the Colony of New South Wales a reliable economic system instead of the monetary chaos which had existed since the Rum Rebellion. Authorised to issue bank notes and to provide trading bank facilities, the Bank of New South Wales enabled trade and provided economic certainty for all who wished to participate.

The records document the establishment of a monetary system in the colony and include minute books, account ledgers, charters and deeds of settlement, the customers’ signature book, bank notes, and correspondence and various financial accounting and shareholding records, including the passbook of a famous customer, Mary Reibey. The date of 1852 has been chosen as a cut-off point being the first 35 years of operation, coinciding with the implementation of the Bank of New South Wales Act of 1850 that amended its legislative basis. The archives clearly capture the business and social ties within the colony, and illustrate the establishment and evolution of Australia’s nascent economy and its ties with the world. 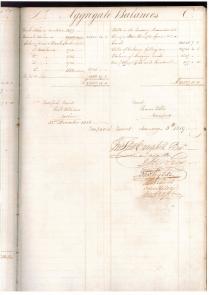