A Knowledge Centre for Australia

How can Australians find out more about the UNESCO Memory of the World Programme for safeguarding documentary heritage?

Resources to address this question are now available at the ACT Heritage Library, Canberra Avenue, Fyshwick, in the UNESCO Memory of the World Knowledge Centre for Australia that has opened there on 15 November 2022.

The UNESCO Memory of the World Programme, which is currently celebrating its 30th anniversary, was established in 1992 to advocate for the preservation of the documents that are the physical – and now digital – embodiment of the memories of individuals, nations, regions and the world; and to make this documentary heritage accessible to all.

The UNESCO Australian Memory of the World Committee, the second national committee in the world, was established by Dr Jan Lyall of the National Library of Australia in 2000. Throughout the Programme’s history, she and other Canberrans have undertaken significant roles at all levels, including developing programme guidelines, and chairing international and Asia-Pacific regional committees.

The extensive involvement of some Canberrans with the Programme at the Asia-Pacific regional and international levels has resulted in an accumulation of resources that are now available for research in the Knowledge Centre. There are publications about the Programme itself; and others that deal with significant documentary heritage around the world.

Canberra’s multicultural communities can discover aspects of their heritage in beautifully produced books in Chinese, Korean, Vietnamese, Spanish, Farsi, Polish and other languages – including a facsimile version of the oldest book printed using movable metal type, the Jikji, published in Korea in 1377.

Fin out more about the UNESCO Memory of the World Knowledge Centre for Australia via LibrariesACT.

The ACT Heritage Library is open six days a week, 9.30am to 5pm from Monday to Friday, and 10am-4pm on Saturday (excluding public holidays). 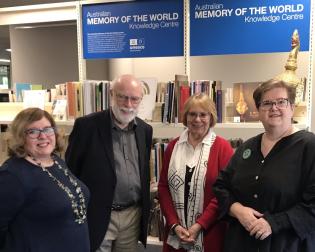