The collections of Professor Frank Fenner AC FAA FRS (1914-2010) in the Australian Academy of Science, the Barr Smith Library in the University of Adelaide, and The Australian University Archives record the life and work of a distinguished Australian scientist. Born in Ballarat in 1914, Professor Fenner’s education was in Adelaide, where his scientist father was Superintendent of Technical Education. Following his graduation MB BS from the University of Adelaide and completion of his medical residency in 1940, he studied for a graduate Diploma in Tropical Medicine at the University of Sydney, believing that the war would be fought in the tropics. He played a major role in the control of malaria in the Australian Army during WWII.

Professor Fenner had a long and distinguished career at the Australian National University. He made major research contributions to the understanding of viruses and the scientific literature on microbiology; his textbooks on virology are used throughout the world.  He is widely known for his significant contribution to control of the rabbit plague in Australia and to the worldwide eradication of smallpox. He was Chairman of the Global Commission for the Certification of Smallpox Eradication and stated that his proudest achievement was announcing on 9 December 1979 that smallpox had been eradicated. In later life he applied his formidable administrative skills to promoting environmental studies.

Professor Fenner accumulated an extensive list of honours, including four Nobel Prize nominations. The Australian Academy of Science annually awards a prize named in his honour, the prestigious Fenner Medal for distinguished research in biology by a scientist under 40. The Academy’s science archives are named the Fenner Archives.

The papers in both collections meticulously record Professor Fenner’s long and distinguished career as a scientist. They record his enormous contribution to scientific research and science communication over more than eight decades. They also form a rich personal archive documenting Fenner’s family background and education; his broad ranging intellectual interests; the history and development of the Australian National University, and his contribution to the broader community, thus providing a rich source for social history. Fenner’s extensive contextualisation of his papers, evident throughout the Guide to the Fenner Collection in the Australian Academy of Science, will richly serve future researchers. 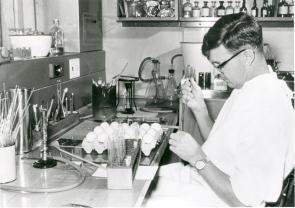