This collection records the life's work of Professor Donald Thomson (1901-1970), who undertook extensive fieldwork in Arnhem Land, Cape York Peninsula, Central Australia, the Solomon Islands and West Papua between 1928 and 1963.

A tireless campaigner for Aboriginal rights, Thomson used his material to write over 40 scholarly publications and a large number of articles, lectures and reports.

The collection is important to researchers, academics and film-makers as it provides rare insights into Aboriginal people's lives and lands prior to government mission administration.

The acclaimed film, Ten Canoes, drew upon Donald Thomson's work, as represented in this collection. The material is also highly valuable to, and continually visited by, Indigenous communities; for some, it is the only record of their heritage.

It has also been used in successful Native Title land and sea claims. 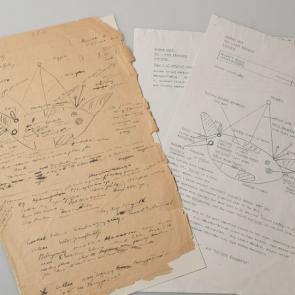 Field note written by Donald Thomson in Arnhem Land on 5th September 1936.The field note includes a drawing describing a bark painting and details the places along the Arnhem Land coast named by Macassans.