The Johnstone Gallery was a commercial art gallery that operated in Brisbane from 1950 to 1972 which is an important period in the development of Australian audiences for contemporary art. Recognised as one of Australia’s foremost commercial art galleries of the period, the Johnstone Gallery represented significant Australian artists such as Charles Blackman, Arthur Boyd, John Brack, Ray Crooke, Elizabeth Cummings, Lawrence Daws, Robert Dickerson, Donald Friend, Sam Fullbrook, Keith Looby, Francis Lymburner, Jon Molvig, Sidney Nolan, Margaret Olley, Lloyd Rees among others, and fostered many artists during their early career.

The archive includes scrapbooks painstakingly collated during the life of the gallery, correspondence, photograph albums and exhibition catalogues. The inclusion of detailed financial records provides insight into art sales during a time of battles over abstract versus figurative art, and helps to chart the gallery’s cultural impact.

The related collection Arthur Davenport Photographs 1955-1992 is a visual record of many of the works of art that were displayed in the Johnstone Gallery from June 1964 onwards. The photographs record the aesthetic that informed the gallery’s exhibitions and some of the key figures involved, including Brian and Marjorie Johnstone. 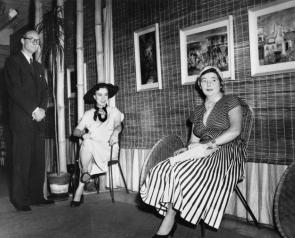