The Kaurna Children’s Letters are three manuscript items in Kaurna language from the early nineteenth century. They were written in beautiful copperplate script by three children taught by Lutheran missionaries at a school established in 1839 close to what is now called the Torrens River in South Australia. One item consists of pages from a copy book written by a girl, Kartanya, in 1840, and the others are letters by each of two boys, Pitpauwe and Wailtyi, written in 1843, acknowledging a gift of toys sent from Germany. It is rare for Indigenous people to be named as authors in such early documents. The Kaurna Children’s Letters represent a remarkable tale of survival over nearly two centuries of change and conflict.

Although it is said the last fluent speaker of Kaurna died in 1927, the Kaurna language has been revived and is becoming widely taught. This language reclamation has been greatly assisted by the three items in this collection and by the survival of early German missionaries’ records. Their recording of Kaurna vocabulary and grammar enabled the language to survive the near extinction of the ‘Adelaide tribe’ in the 19th century. Kaurna language is now taught in schools and University courses, resulting in a growing number of fluent Kaurna speakers. Its revival serves as a model for national and international language reclamation programs.

These items are three of just five surviving documents written in the nineteenth century by Kaurna people in the Kaurna language. In the shared history of First Nations peoples and the settlers who invaded their country they are a rare instance of the hand of identifiable First Nations individuals. While they are relevant to an assessment of the role of early German immigrants to SA, perhaps more significantly they provide a tangible connection for Kaurna people to their ancestors and are a significant symbol of Kaurna cultural and spiritual identity. 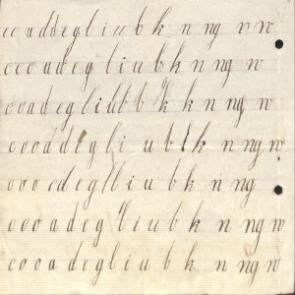 More information about this listing is available here; The University of Adelaide Library