The collection consists of 169 crayon drawings collected by noted anthropologist Mervyn Meggitt while undertaking fieldwork with Warlpiri people at Lajamanu (Hooker Creek) between 1953 and 1954.

In order to facilitate his research into Warlpiri social organisation and the totemic designs associated with Warlpiri Dreamings, Meggitt encouraged men and women to make crayon drawings. The drawings, by 21 men and three women, cover a wide variety of subject matter, from ceremonial and cosmological knowledge to desert landscapes and scenes of settlement life, providing insights into the changing world of the Warlpiri. Two of the men whose drawings feature prominently, Larry Jungarrayi and Abe Jangala, subsequently became internationally renowned artists.

The drawings are of historic significance as they document the relationship and obligations of the artists to their traditional country across the vast Tanami Desert, shortly after they had been displaced to a new government settlement at Lajamanu in 1948. They predate by two decades the practice of acrylic painting on canvas that emerged at Papunya in the early 1970s that began a revolution in modern Aboriginal art. The artistic and research significance of the collection was acknowledged in a major exhibition at the National Museum of Australia in 2014-2015, Warlpiri Drawings – Remembering the Future.

The collection of drawings, along with original photographs and accompanying audio material featuring Meggitt discussing the drawings, was deposited with AIATSIS in 1965 and officially donated by Meggitt's widow, Joan Meggitt, in 2013. 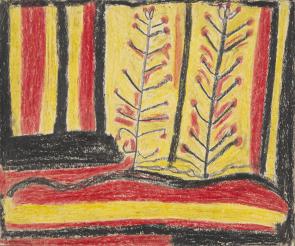