The John Meredith Folklore Collection in the National Library of Australia is the first Australian collection of folk culture to record the voices and music of the people it represents, following many years of gathering in books. The song, spoken word and dance it documents reach back into the primal cultures of Australian society, including convict memories, the traditions of rural labour, the gold rushes, diverse immigration, bushranger episodes, and the shearers’ strike of 1891. It presents the aesthetic of vernacular music, as performed by solo artists using the traditional and popular instruments of their day.

The collection continues to be significant as a reference for artists, performers, broadcasters and researchers. It established the model in technique and technology for subsequent collectors. It informed the growth of interest in Australian folk music and its revivals since the 1950s. It remains a source for Australian music in other and hybrid genres such as country and rock. Its dissemination via school songbooks and bush bands, and its influence on popular music, situate the John Meredith Collection at the heart of the folk music that subtly permeates Australian national identity. 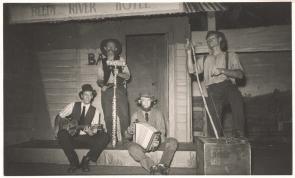