The Minute Books of Pre-Federation Australian Trade Unions, in the collections of twelve institutions – Noel Butlin Archives Centre (Australian National University), Broken Hill City Library, Fryer Library (University of Queensland), James Cook University, National Library of Australia, State Library of New South Wales, State Library of South Australia, State Library of Victoria, State Library of Western Australia, University of Melbourne Archives, University of Newcastle and University of Wollongong – record collective decision-making by Australian workers in the nineteenth-century. They are a record of democracy for workers – both men and women. They document the early formulation of our current industrial relations system, the beginnings of our social welfare system, the early history of communities and industries, and working lives that are no longer accessible today. They record events and achievements as they happened, local issues and disputes that developed into general strikes and became the first steps in broader campaigns such as that for the 8-Hour Day and the impetus for political representation of workers through the formation of the Australian Labor Party. 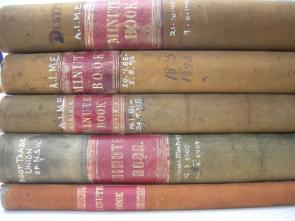 A selection of Union Minute Books