The 1862 Land Act Map (known as 'the big map'), created by the Victorian Government in 1862, is one of the largest maps made in Australia (measuring 4.5 metres by 6 metres) and the only one of its kind ever produced that deals with the whole of Victoria.

Intended for public display to show the 10 million acres of land available for selection under the Land Act, the coloured map is a record of land administration in the colony. It shows the extent of the dispossession of Indigenous people from their land, and provides an important visual representation of the spread of European settlement and farming. It also shows demarcations of parishes, townships and counties.

The map reflects the vision of Lieutenant-Governor Charles LaTrobe. It was the result of Charles Gavin Duffy's Land Act 1862, which attempted to broker a compromise in the protracted agitation among squatters, gold seekers and small-scale farmers over control of vast areas of land.

The first geodetic survey of Victoria, the map is significant not only for its purpose and size, but also because it provides an environmental snapshot, with details of soil types, vegetation and wetlands.

It records Major Mitchell's expedition route and includes comments on water sources made by Wade and White in their respective government-commissioned expeditions. It also includes the Aboriginal names for country. 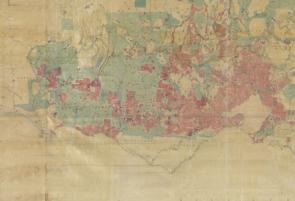