Colonel William Light was South Australia's first Surveyor-General. His design for the city of Adelaide is considered by many to be a prototype for an ideal city plan.

Adelaide was the first town planned in the world using trigonometrical survey rather than the established 'running survey'. Light worked with a grid design, consistent with that used in other British colonies, but his plan introduced the concept of the 'garden city' - the belt of parklands.

Light's plan was featured in the influential work by Ebenezer Howard, Garden Cities of To-morrow (1898, 1902) which inspired a key movement in the development of modern town planning, and influenced urban designers such as Walter Burley and Marion Mahony Griffin.

This incsription was originally made as the William Light Collection 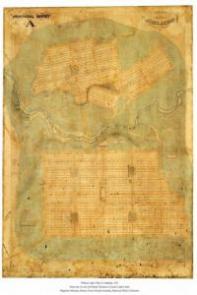