During the First World War nearly 7000 ‘enemy aliens’, mainly of German and Austro-Hungarian origin, were interned in camps in Australia.

Camps, referred to at the time as 'concentration camps', were established at Torrens Island, South Australia, Rottnest Island in Western Australia, Enoggera in Queensland, Langwarrin in Victoria, Bruny Island in Tasmania and in NSW; Trial Bay, Berrima and Holsworthy. The ‘concentration camp’ at Holsworthy, near Liverpool, New South Wales, was the largest.

The collection produced by internees in Holsworthy between 1914 and 1919 comprises personal papers, diaries, playbills and concert programs, ephemera of camp life and drawings, along with 167 glass photonegatives of camp life taken by a camp guard.  All were sold to the State Library of NSW after the war.  Some were allegedly compulsorily acquired before prisoners were deported.

The collection helps to document one of the less heroic stories of the home front during the First World War, when thousands of men considered ‘enemy aliens’ were detained in concentration camps. Internment had a devastating effect on individuals and families, and left a lasting legacy of fear and hurt within the sizeable German community in Australia after the war.

The collection documents aspects of daily life in the camp and highlights the creative ways in which inmates tried to preserve both culture and sanity under confinement. However it also includes evidence of internal prisoner extortion by a group known as the ‘Black Hand’ gang, and of a riot against this gang at Holsworthy in 1916.

The collection is significant for the evidence it provides of life in the concentration camps and of the emotional impact on individual internees. Along with holdings in the National Archives and National Library of Australia, and important collections held internationally (notably the Paul Dubotzki collection in Germany), it preserves evidence of one of the important, but lesser-known stories of the home front during the First World War.

The collection gives a voice to the many people who were imprisoned in Australian during the First World War and offers an alternate narrative to the conventional Australian war experience of the AIF serving on Gallipoli and the Western Front. 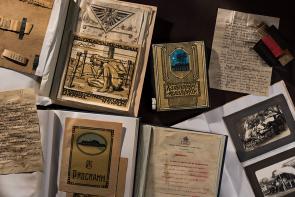