The Old Registers is a nine-volume series commenced in 1802 and concluding in 1824, in which private legal transactions and dealings between individuals and businesses in New South Wales, ranging from marriages and separations to convict/master relationships, through to land transactions and sealing and whaling agreements, were registered and made available on the public record. They provide a unique and irreplaceable insight into the social record of the colony of New South Wales from January 1794 to May 1824.

The system of registering private legal transactions in books kept by the Office of the Judge Advocate was begun in November 1800 by Governor King, however none of the books survived. Further instructions issued by Governor King on 26 February 1802 allowed instruments dating back to 1794 to be added to the new surviving Registers. The Supreme Court of New South Wales was established in May 1824, and the functions of the Office of Judge Advocate were transferred to the Court, which retained the Register and the function of land registration until 1844, when the Office of Registrar-General was established. This function is now part of the former Department of Lands (NSW), now Land and Property Information , which records dealings related to land transactions.

The Old Registers document the first step in this continuing system of registration. The process of registering transactions has been fundamental to legal proceedings and daily business in Australia for over 200 years. The Old Registers represent the beginning of private business in the colony being recognised in the courts, and reveal an important step in the development of the cultural landscape of early Australia as they indicate the growing involvement of government in everyday life. They provide valuable information to researchers on the nature, demographics and values of the colony, as no other comparable records exist for this period. 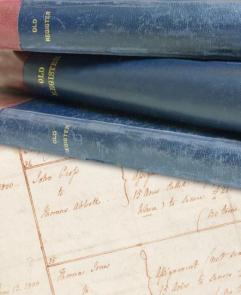 Volumes of the Old Registers