The Mitchell and Dixson Libraries at the State Library of New South Wales hold the most comprehensive collection of First Fleet journals in the world. The nine journals, written at the time or as memoirs, provide eyewitness accounts of the voyage to and the early settlement of Australia from 1787 to the 1790s. They occupy a central place in Australian documentary history, recording the most profound social, cultural and political revolution experienced on the Australian continent.

Written by men of different ranks, each journal offers a unique perspective, and several also record Indigenous vocabularies. Two journals containing original drawings contribute to the significant documentary record of European settlement, the foundation and development of Sydney, and natural history, including species that are now extinct.

The journals provide evidence of the equipping of the First Fleet, and the British Government’s motives in creating a penal colony in New South Wales. They deal with relations between Governor Phillip and his officers and Marines; relationships between convicts and Marines, Royal Navy officers and free settlers; sexual relations and tensions; and punishment, law and order.

The First Fleet journals are significant as an invaluable record of the foundations of Sydney and the beginnings of the Australian nation; of the Indigenous lifestyle at the time of colonisation by Britain in 1788, and the genesis and development of relations between the British and Indigenous people in the Sydney region. They are also a significant record of the native flora and fauna; and of the European aesthetic response to this new and alien topography and landscape. 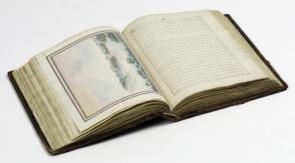 William Bradley's Journal titled 'A Voyage to New South Wales', December 1786 - May 1792, one of the nine First Fleet journals held by the State Library of NSW.