These records document the conception and unfolding of an audacious vision of tertiary education for a settlement of only 30,000 individuals. The records were meticulously collated, created and controlled by the Registrar of the University of Adelaide during the University's establishment and first fifty years. The comprehensiveness and completeness of this collection provide unique insights into the origins of higher education in Australia's first free settler colony, illustrating the impact of the University in implementing a series of progressive social reforms and showcasing the forward thinking attitudes within the liberal, religiously tolerant meritocracy which flourished in Adelaide.

The Registrar's records are an irreplaceable primary source that provides documentary evidence of the foundation and development of the University as a key educational and cultural institution of South Australia. Such a claim could be made of many universities in Australia but few of these could draw on the close links with the history of the colony, and later state, where they are situated, that are demonstrated in these records. 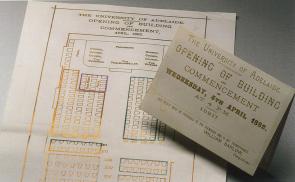