Draughtsman Thomas Burstow moved to Darwin in 1940 to work for the Lands Department. He mapped air-to-ground bombing ranges and drafted plans for gun emplacements, and became an Air Raid Warden. When the first bombing raid on Darwin by Japanese planes occurred on 19 February 1942, Tom Burstow ripped out the first few pages of a notebook, then began to write a detailed account of the bombings, including damage to ships and buildings, civilians killed and wounded, trenchant comments about the behaviour of civilian men seeking evacuation, and the capture of a Japanese pilot by an Aboriginal man on Bathurst Island. The diary meticulously tracks the bombing raids from 19 February to 26 March 1942. Tom Burstow then joined the army as an engineer surveyor.

Thomas Burstow’s handwritten diary of the bombing of Darwin by the Japanese air force from 19 February to 26 March 1942, held in the Northern Territory Library, is of national significance as the only extant account written by an eyewitness civilian of an event of enormous significance in Australian history, when the vulnerability of this country to hostile air attack became a stark reality. The ‘rough diary’ provides an emotional connection to an individual caught up in the drama of this event, and these quick notes, scribbled under difficult circumstances, make the diary a ‘war relic’ as well as a source of first-hand information on the experience of sustained enemy attack. 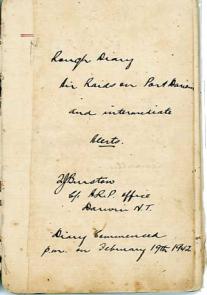