The collection of 170,700 personal dossiers of Displaced Persons who emigrated to Australia between 1947-53 is of national significance for powerful historical and individual reasons. It documents a major shift in Australia's immigration priorities, which prior to World War 2 had favoured migration from Anglo-Celtic sources, and thus transformed political and social expectations of the cultural diversity of Australia. But beside being the evidence of shifts in government policy, the collection is also of significance for its resource of personal histories. These have not only evidentiary value but also emotional significance as the interface between old European family identities and new Australian citizen identities. 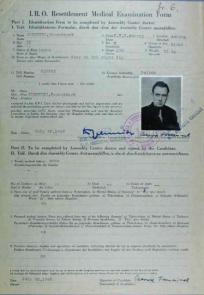