On 23 May 1912 entry number 29, by Walter Burley Griffin, landscape architect, of Chicago, Illinois, USA, was declared the winner of the competition to design Australia's new federal capital. The winning design incorporated elements of the leading international ideas of the day in the science of town planning, such as the City Beautiful movement and the Garden City movement. It also contained references to other notable city planning models such as the plan of Washington, Daniel Burnham's 1908 plan for Chicago and the "White City" of the Chicago World's Columbian Exposition of 1893. Griffin's design was beautifully rendered by his wife and creative partner, Marion Mahony Griffin, who used a muted palette with gold highlights in a style that contains elements of Japanese artistic practice. Their combined efforts also articulated a city form with high symbolic values, and placed democratic ideals at the apex of the monumental structures of the group of parliamentary buildings. The design also integrated the natural and built environments to create a "bush capital". 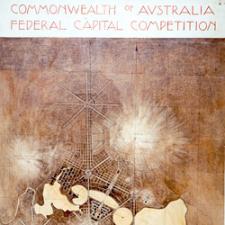